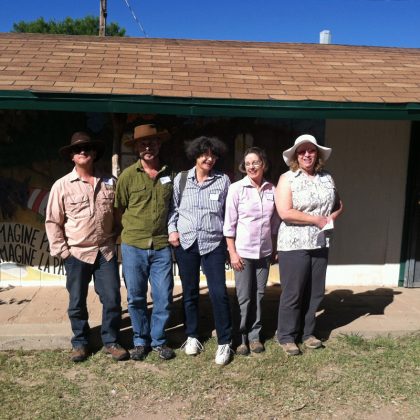 s stand in front of a mural painted by members of the Green Valley UU congregation.  The mural is on the side of the Arivaca Humanitarian Aid Office visited by the Revs. Ron Phares (Mountain Vista UU), Matthew Funke Crary (Green Valley in Amado UU), Christiane Heyde (Community Minister affiiated with MVUU), Lisa McDaniels Hutchings (Executive Director of UU Justice Arizona) and Linda Lawrence (Sky Island UU).
Follow this link for a list of migrant related books and videos.

The Arivaca Humanitarian Aid Office provides assistance to people who have made the dangerous trek across the border.  Assistance includes counsel of the dangers of crossing the desert, food, water, and clothing.

This is one of many graves near Arivaca marking the places where human remains of migrants have been found.

This priest has re

Shura Wallin, an active participant in Los Samaritanos (the Samaritans) and No Mas Muertos (No More Deaths) shows a map that indicates (with red dots) all of the places where migrant deaths have been reported.  People in the background are preparing to receive a meal.

People who have recently been deported prepare to eat a meal at El Commodore.

The cemetery near Grupo Beta in Nogales, Mexico, where deportees who cannot find shelter sometimes sleep at night though it is now patrolled by Mexican police.

A portion of the wall that divides Nogales, Arizona, from Nogales, Mexico as seen from the Mexican side of the border.
A memorial in the Nogales, Mexico, spot that 15 ye